While giving money to tractor manufacturers may or may not help, the triumvirate – Delhi, UP and Haryana – should look to plan out a green farming zone. 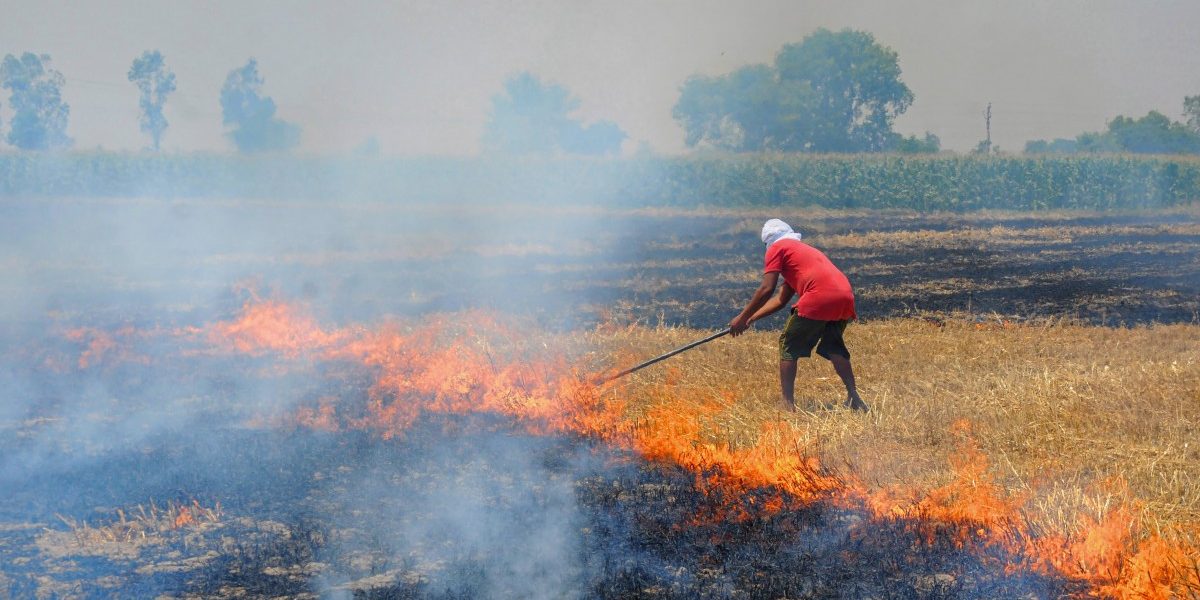 Urban society, industry and people still face the trammels of the lockdown, yet Delhi is getting breathless on soot again, and a philosophical riddle – can there be smoke without fire, is answered.

On the face of it, as harvest season begins, farmers from Punjab to Western UP (‘green revolution’ areas) are burning paddy stubble to clear their fields for next sowing. But did they really start the fire?

Rewind to the 1960s. Agriculture was rapidly changing in Punjab and Haryana. The Punjabi farmers were asked to replace their native seeds and system of agriculture with green revolution seeds and chemicals. Most farmers considered these seeds as “American” or “melecchha” and simply refused. But agricultural experts and the government were adamant. Thus began a cat-and-mouse between farmers and agricultural officers, who used all tactics from seed bombing to ‘fly-by-night’ operations dumping chemical fertilizers unto farmers’ fields and other propaganda. With time, the government won but gave birth to new problems – monocultures and inedible paddy stubble.

Until 1970, native paddy gave farmers nutritious grain and its long stock (straw) was used for cattle feed. The entire plant was re-circulated in the local farm economy. But the green revolution seeds were dwarf varieties of paddy, and their stocks due to higher silicon content were inedible for cattle. By the time scientists understood this problem, all of Punjab was already planted by these seeds and our cows and bulls were malnourished. As a solution, it was the scientists who told the farmers to burn stubble in the 1970-80. As for the bulls and cows, tractors replaced them.

The problem was contained for a while due to manual harvesting in most areas, but shortage of labour and advent of the mechanised harvesters aggravated the burning as the harvester didn’t cut the stubble low enough. Farmers have to bear additional costs, if they want the stubble shaved off.

Despite having spent nearly Rs 1,152 crore of public money in two years, our farmers and public have only been served corporate-backed solutions like introduction of “Happy Seeders”, and other mulching equipment, adding more to the profits of the tractor industry rather than redressing root of the problem.

Hence, they have miserably failed on the ground and we are deeper into the smog and risk losing Rs 11 lakh crore because of this problem.

Despite the uneasiness, this October-November would be critical in our understanding of urban air pollution. Each year experts blame the farmers for the pollution, overlooking the industrial and vehicular sources.

Nevertheless, the farmers around Delhi have a crucial role to play, if not in polluting Delhi, but healing it. Till now the farmers and their fields have been part of an extractive economy which promotes toxic chemicals, water guzzling crops and extreme dependence on fossil fuels. Its results are “Udta Punjab” phenomena, cancer trains, falling incomes and a scorched earth.

The industrial agriculture system has failed Punjab, and now it’s time to embrace agro-ecology. First stop, Delhi and other cities need to green-wall their perimeters. This means that 2-3 kms radial of trees should surround urban centres like Delhi. These can be plantations, orchards, or agro-forestry. But how will it be done? The governments of Haryana and UP have heavily subsidised (up to 70%) orchards and fruit crops.

Instead of giving money to tractor manufacturers, the triumvirate – Delhi, Uttar Pradesh and Haryana, should plan out a green zone. Delhi can offer additional subsidies or help farmers by giving the plantation farmers in the green zone, get their land fenced. Land ceiling relaxations could also be considered. And this step should not be seen as charity, but a reward for farmers providing ecosystem services for Delhi-NCR.

Green-zone farmers should be bound by contract for producing organically, and synchronisation with Pradhan Mantri Paramghat Krishi Yojana can reduce their certification and transition costs.

A new organic brand for urban periphery farmers is a must, and Mother Dairy, etc can directly procure from them. This step will help achieve better incomes, reduce ‘food miles’ and help diversify from the paddy. The farm bills have made the APMC redundant and the MSP dwindle, so the Delhi government can encourage farmers in the ‘green zones’, bring their produce grains directly to farmers’ markets in the NCR region. European cities have successfully improved air and water quality by encouraging organic farms around their cities, while their citizens have benefited from cheaper fresh food and greater price assurances for farmers. Cities across India can adopt this model.

But, for the farmers outside the green zone, a strong push for diversification should be made. Even for farmers who continue with paddy-wheat, should opt for new tall varieties or land races. It is important to know that Basmati farmers don’t burn the stubble, as the straw is used for cattle feed. We need to revert to native varieties which are fetching higher prices with consumers.

Mulching has already been encouraged by the government, and IARI, also known as Pusa Institute, has launched a low-cost decomposer too, but how soon will the farmers adopt it? The easier way is to support farmers decentralise and grow for their local markets and have a platform for consumer linkage.

India produces too much paddy already, and with government’s help, Indian farmers can take advantage of global trends and grow millets such a quinoa, ragi, etc organically for export purposes. Agricultural and Processed Food Products Export Development Authority (APEDA) again can play a critical role in studying global trends and make projections for farmers. But even domestically, India has major shortage of oilseeds and pulses, and to fulfil this need mixed farming should be encouraged. Both these types of crops get more MSP than paddy.

Finally, cities like Delhi need an urban food and forestry policy. Urbanites need to be encouraged to grow rooftop food gardens and open public parks for agroforestry. An “air-cess” needs to be levied on all taxis, which may fund the plantation drives in and around the cities.